Turkey's economy has performed remarkably well with its steady growth over the past 14 years. A sound macroeconomic strategy, prudent fiscal policies, and major structural reforms have all contributed to the integration of Turkey's economy into the globalized world while also transforming the country into one of the major recipients of FDI in its region.

These reforms have increased the role of the private sector in Turkey's economy, enhanced the efficiency and resiliency of the financial sector, and placed public finance on a more solid foundation. These reforms strengthened the macroeconomic fundamentals of the country, allowing the economy to grow at an annual average real GDP growth rate of 5.6 percent from 2003 to 2016. 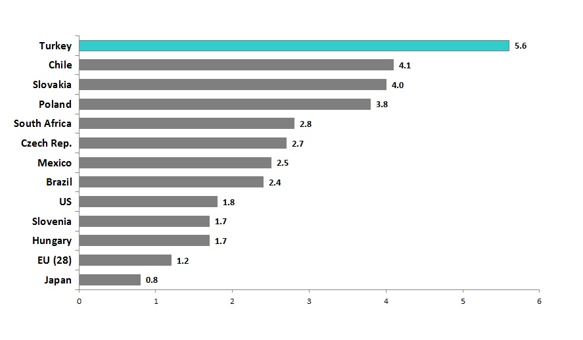 Turkey's impressive economic performance over the past 14 years has encouraged experts and international institutions to make confident projections about Turkey's economic future. For example, according to the OECD, Turkey is expected to be one of the fastest growing economies among OECD members during 2015-2025, with an annual average growth rate of 4.9 percent. 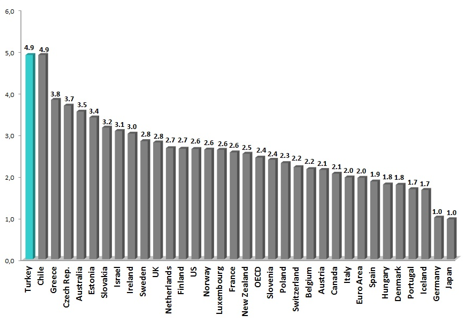 Together with stable economic growth, Turkey has also reined in its public finances; the EU-defined general government nominal debt stock fell to 28.3 percent in 2016 from 72.1 percent in 2002. Turkey has been meeting the “EU's 60 percent Maastricht criteria” for public debt stock since 2004. Similarly, during 2003-2016, the budget deficit decreased from more than 10 percent to less than 2 percent as a ratio to GDP, which is one of the EU Maastricht criteria for the budget balance.

The visible improvements in Turkey's economy have also boosted foreign trade. Exports reached USD 143 billion by the end of 2016, up from USD 36 billion in 2002, while tourism revenues, which were around USD 12.4 billion in 2002, exceeded USD 22 billion in 2016.

Significant improvements in such a short period of time have registered Turkey on the world economic scale as an exceptional emerging economy. It is the 17th largest economy in the world and the 6th largest economy when compared with the EU countries, according to GDP figures in 2016.

Parliament has ratified many constitutional amendments to make the 1982 Constitution more democratic and to expand democratic rights and freedoms in the country. These efforts gained significant momentum after the EU recognized Turkey as a candidate country in 1999 and later agreed to start full membership talks with Turkey in 2005.

The functions and powers of the Turkish Grand National Assembly include the adoption of draft laws; the amendment and repeal of existing laws; the supervision of the Council of Ministers (Cabinet) and the Ministers; the authorization of the Council of Ministers (by a separate authorization act where the scope and purpose of such authority are clearly set forth) to issue governmental decrees having the force of law on certain matters; the debate and approval of the budget draft and the draft law of final accounts; making decisions on the printing of currency; declaring war, martial law, or emergency rule; ratifying international agreements; making decisions with 3/5 of the Turkish Grand National Assembly on the proclamation of amnesties and pardons in line with the Constitution.

Judicial power in Turkey is exercised by independent courts and high judicial organs on behalf of the Turkish nation. The judicial section of the Constitution is based on the principle of the rule of law. The judiciary is founded on the principles of the independence of the courts and the security of tenure of judges. Judges work independently; they rule on the basis of personal conviction in accordance with constitutional provisions, law, and jurisprudence.

The legislative and executive branches of the Turkish government must comply with the rulings of the courts and cannot change or delay the application of these rulings. Functionally, the Constitution called for a bipartite judicial system that was divided into an administrative judiciary and an ordinary judiciary.

The executive branch in Turkey has a dual structure. It is composed of the President of the Republic and the Council of Ministers (Cabinet).

The President of the Republic is the head of state and represents the Republic of Turkey and the unity of the Turkish nation. The President is elected by popular vote among the Turkish Grand National Assembly members who are over 40 years of age and have completed higher education, or among ordinary Turkish citizens who fulfill these requirements and are eligible to be deputies. The President's term of office is five years and one can be elected for two terms at most.

The President of the Republic has duties and power related to the legislative, executive, and judicial branches, and is responsible for ensuring the implementation of the Constitution and the regular and harmonious functioning of the organs of state.

Prime Minister and Council of Ministers

An increasing number of people from various parts of the world are moving to Turkey to start a new life, to work, or even to find peace of mind for their retirements. The country has developed dramatically in the last fourteen years, and the pace of progress in certain fields is nothing short of astonishing.

With its unique geographical location combined with a rich and diverse history, right in the cradle of many different civilizations, Turkey is a privileged place to live for expatriates and their families.

Many of Turkey's new residents hail from countries like the UK, Germany, Ireland, Denmark, the Netherlands, Norway, Austria, Belgium, France, USA, as well as several of the Gulf countries. Thanks to the amendments in Turkey's property law that lifted the reciprocity principle, foreign homebuyers and investors are now free to purchase any property in Turkey.

From flats in urban centers to villas in suburbs, there are a multitude of options to choose from when looking for housing in Turkey. Major metropolitan areas have the most modern and complete environment for an extravagant life in the city, where luxurious residence complexes offer all the daily amenities such as private security, kindergartens, sports complexes, social facilities, parking lots, and shopping malls for their residents.

Foreigners wishing to work or reside in Turkey are obliged to file an application to the relevant Turkish authorities with required documents in order to obtain a work or residence permit. The methods and principles concerning work permits to be issued to foreigners that will be employed in Turkey vary by the relevant sector, such as education, housekeeping services, health services, tourism, aviation, entertainment, and others, as well as with respect to foreign direct investments, special foreign direct investments, professional services, and liaison offices. Meanwhile, residence permits are issued to foreigners mainly based on ownership status of real estate or on the intention to run a business or establish commercial connections in Turkey.

The transportation system in Turkey makes good use of the country's highly developed infrastructure. With more than 50 airports across the country, one can fly from one city to another in Turkey in less than an hour in most instances. An extensive network of dual carriageways and highways makes it very easy to drive from your home to any major city in Turkey. The high-speed train network, meanwhile, has been improving rapidly in the last decade; the 14 largest cities of Turkey are expected to be interconnected with high-speed train lines by 2023, the centennial of foundation of the Republic of Turkey.

The education system of Turkey underwent serious reforms in the last decade. Most apparent are the now compulsory twelve-year education and the dramatic increase in the number of schools and other educational institutions. Many private and foundation schools, in addition to public schools, offer education services. Moreover, international schools, where only pupils holding a foreign passport can attend, are present throughout the country. While schools providing education in European languages such as English, German, French, and Italian are available, there are other institutions where languages such as Russian, Japanese, and Chinese are taught as well.

The healthcare system in Turkey mainly operates with three different types of hospitals: public, university, and private. While social and health securities are governed in essence by the state, it is also possible to have private health insurance. The majority of hospitals in Turkey, both public and private, are either meeting or surpassing international standards in equipment quality and expertise.

The cultural activities in which one can engage in Turkey are only limited by individual interests and capabilities. Be it arts, hobbies, entertainment, or other leisure activities, the possibilities are endless. In all major cities one can find movies, plays, concerts, ballets, operas, and other varieties of cultural activities awaiting either participants or spectators. Local festivals and more traditional forms of leisure activities are also rising in popularity.

Turkey's rich geography and suitable terrain make the country an ideal place for alternative sports such as mountaineering, golf, scuba diving, rafting, skiing, and yachting. Naturally, well-established and popular sports like football, basketball, and volleyball have a considerable number of players and supporters all over the country.

Located in the Eastern Mediterranean region and surrounded on three sides by temperate seas, Turkey has a climate allowing for extreme variations in weather, often in the same region or province. As such, it is possible to go skiing in a mountain resort after sunbathing on a sandy beach, both in the same day.